He was bruised all over, practically. He wasn’t hurting, for he had been numb for years. It had been 13 long years since “it” had happened. For over the years, he was hurting but apparently not enough to have the bravery of finishing it. The most awaited of his life was coming; soon enough, he would join his little sister. In heaven, or he might also see her in heaven while he rotted in hell. He had never had the chance to be a good person. Hell was probably designed for people like him.
Derrick went on Instagram and saw a Muhazi Grand Resort sign on someone's story. It appeared to be very peaceful. What a wonderful place to die. He'd have one last luxury before joining the rest of these in hell. He examined the razor-sharp new Swiss Army knife he had purchased at the beginning of the month. He placed his half-empty brandy glass on the glass coffee table and drowned the remaining drink. His roommates were out today and would most likely be staying somewhere since the curfew had been extended to 10:00 p.m. It was a pleasant day when he was alone and wallowing in his misery. He loved brandy because it was the only thing that could put him to sleep faster than any sleeping pill.
The dream or rather nightmare came back. His angelic baby sister was back. “It” came back. The horrible time he would never forget, even unconscious, remained a part of him. The sad part was, the few happy images of her had blurred over the years. “Inda wavutsemo irutwa níyavuyemo…” Loosely translated into “You’re worse than a miscarried pregnancy. It was always that phrase that woke him.
Sweat broke at his brow, he realized that he was seated on the burgundy sofa in the living room. He opened one eye after the other. Only to find three pairs staring at him funnily.

“Yo bro, what got you so pent up to drink this much?” Jacob, the practical detailed one in the trio asked.

“Yeah man, don’t ask nonsense. It must be Sheilla, the other therapist they brought at work...sparks were flying in the last session.” Said Sasha, the playboy.

“Calm down bruv, Derrick needs to go to bed, this sofa can break his spine man!” Came the reply from Denis, the caretaker.
Derrick fuzzily remembered. It was the dream (nightmare). The knife, he fumbled around the sofa getting up. It would draw unnecessary attention if the boys realized that he had bought a knife. A stream of questions would follow. He jumped from the sofa, his shorts were stuck to his thighs. He adjusted them, grabbed the knife which was luckily wrapped in a napkin, and fled to his room.
His guys looked at his disappearing figure and chucked together. 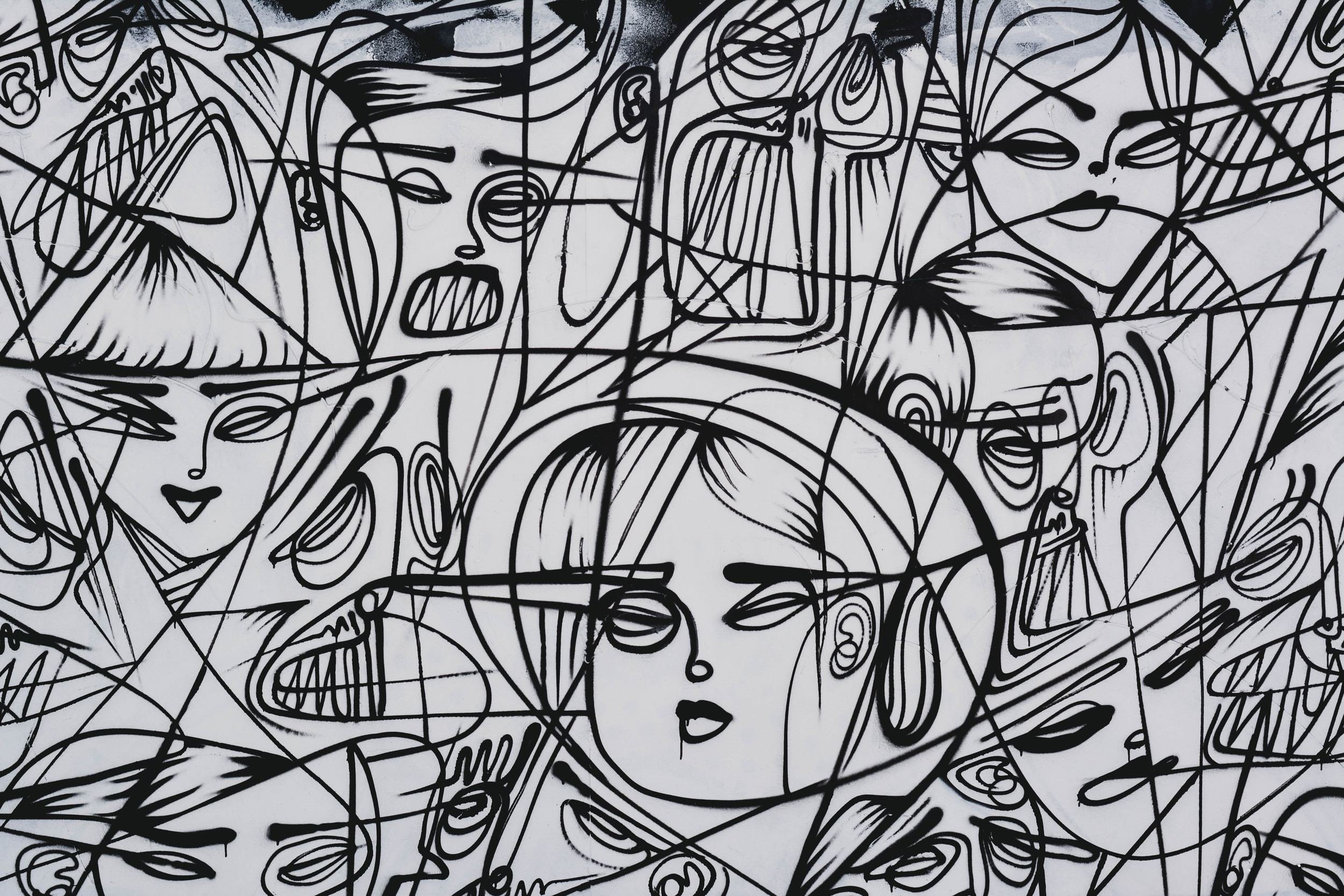 The morning came all too late for Derrick. He prepared for work, cooked some omelette for the boys, covered it and left for work. His phone dinged in his hand. Calendar: Therapy with Sheilla.
For some strange reason, he had requested more therapy sessions than the office's scheduled Friday sessions from Sheilla, the office's counselor. It was the middle of the week. A typical day for the rest of them. It was going to be a disaster. He stood at their house's gate, waiting for a bike to pass by. He despised dirt roads, but he didn't live in Nyarutarama or Kacyiru, but rather in a Kimironko neighborhood. He despised a wide range of things. He was number one on the list.

His email was prepared  and in his google doc. He was going to ask for days off at work. He thought he liked Sheilla. She would be the last person he saw. He hopped on the next bike (moto) he saw.
He arrived at work in Kacyiru in thirty minutes. The whole affair of days off worked almost magically. The boss, a pot-bellied kind man in his sixties, agreed; he also told him that it was high time he worked on himself.

“Get some rest, you look tired and at least twenty years older.” Sylvestre, the boss, has said after giving him the note allowing him the one week vacation. Little did he know, Derrick was planning to disappear forever, not so far off.

“Thank you sir, haha, you are right, I was feeling worked up for the past few days.” Derrick said, smiling charmingly. The man patted his shoulder with his fatty hand. “Have a nice vacation!”
Derrick left the boss’s office feeling a bit better. For once things were working in his favor. He headed to Sheila's office.

“Hodi, Hodi,” Knock, Knock! He said in his charming voice, with his smile. Maybe Sheila would remember it. Along with the story he had written on the paper for her.

“So I am afraid I won’t be able to be with you for our scheduled session. I am starting my vacation today!” He thought he sounded naturally happy.

“Oh Derrick, it’s fine! We can do it another time maybe, I can still see a shadow in your eyes.” Sheilla said, but her eyes said that she wanted the session to happen. Derrick smiled at her ignoring her deep words. “You could join me on the vacation though!” He said in his best flirty tone. It was easy to flirt with her. Most of the dangerous things came easy for people to do. “Maybe one day.” Sheilla winked. “Have it as a replacement.” Derrick said as he gave her the folded paper. Her eyes widened in surprise. He loved her eyes.

They were deep like his little (dead) sister. After a short (almost intimate) conversation, Derrick left.
Sheilla couldn’t wait to read the paper, Derrick couldn’t wait to disappear...Forever. As Derrick took the bus to Nyabugogo, the common bus station, to get another one to Rwamagana, Sheila was feeling frustrated. She wanted to know what Derrick had written. At noon, approximately 1:00pm, Derrick turned off his phone as he hopped on a bike to take him from the bus station in Rwamagana to the hotel, Muhazi Grand Resort.

Sheilla unfolded the paper. The words were in capital letters of a clear handwriting, oh he also has a nice handwriting, she mused. SHE SAID WE WERE WAYWARD SPERMS. Next to those words were, SHE DIED, I AM JOINING HER SOON.   I am unsure if I will rest in peace; however, I guess there is only one way to find out. I liked you Sheila, I guess you liked me too.  A single tear escaped Sheila’s eye. On the back of the paper, address: Muhazi Grand Resort. “Shit!” Sheilla muttered as she grabbed her phone, keys, and the paper and ran to her car. She hoped she wouldn't get there too late.

Derrick checked into his room at the hotel. VIP. It smelled nice. He was having the luxury his sister would never have. He looked at the bottle of Bacardi he had ordered and the plate of chicken and fries. Instead of eating, he unpacked.
Razor, Swiss Army Knife, Rat Poison (a classic), a rope, three bottles of sleeping pills. Two shorts, a single t-shirt, and undies. The only clothes his sister had worn when she was little. He drank a full glass of Bacardi and his demons danced out of their nests. “Ma, she is sick, the doctor said she needs to eat and take her medicines. How will I do it when you are not there?” 9-years old Derrick asked his mother who then sucked on a waragi in a polyethylene sachet. “Leave her, she will be okay.” His mother retorted.

“Deri, don’t stress me, we have bigger problems than worrying about your sister who is just crying.” She left him that night with his sister. She was getting feverish by the hour, little Derrick did not know what to do except trying to give her the paracetamols since his mother had not bought other medicines.
In daylight, Derrick would take his sister outside, sit in their backyard waiting for anyone to help him while his mother was gone. His sister had gotten so sick. It was hard to go and fetch even the water to wash her since the minute he left she would be wailing. The flies would be in her face always, and it crushed Derrick. She had only two shorts, the rest, she had outgrown.
One lucky afternoon, a woman asked Derrick if he could help him. They bathed and ate at the woman’s place along with her children. The night was so horrible when their mother swore at the woman and almost beat her for helping them.

“Jya ubareka aba ni ibinyendaro.” Leave them, they’re bastards! His mother said in her slurred voice as she hauled them. His sister’s condition was even worsening, her hollow cheeks soaked with tears, his nerves were all visible like her ribs. The woman had said that she had liver disease that had also yellowed her eyes. Only at 2 years, his sister looked so lifeless. When she cried, their mother beat her up. Derrick’s heart crumpled.

The following night. Their mother was out again. Derrick had gotten some food for his sister but she wouldn’t eat it. She kept crying. Derrick was up all night. Their mother never came home. It was true, their mother was not a trader, she was a whore. In the morning, when Derrick tried to wake his sister, she wouldn’t wake. She was gone. Derrick knew. She was dead. DEAD. He screamed in pain. Reality kicked in thirty minutes later. He needed to tell his mother. He ran to the neighbors to get a phone to call his mother. Luckily he knew her cell phone number by heart. She took the phone on the last ring.
“Mother, Kevine yapfuye.” Kevine died. Derrick whispered in between tears. The neighbours were now gathering, the old women going in quickly to check on Kevine and they came out saying that she was gone!
“Haha, kari karatinze gupfa!” She took too long to die. She laughed. There was a manly voice in the background. Derrick froze. “Just get some help! It is your fault she died Deri, I left you to watch her!” His mother started screaming into the phone. “N’ubundi intanga ya se sinzanayikumbura!” I won’t miss that sperm! She muttered into the phone. “Inda wavutsemo irutwa níyavuyemo…” You shouldn’t have been born!
When he couldn’t take it any more, he hung up. Little Derrick responded to a million and one questions of the villagers as they tried to find a way to bury Kevine, his sister. After the short rushed funeral, Derrick left home. He never saw his mother again. Even after all these years.

Nobody would see him again either. At least nobody would see him alive again. Derrick cried for his dead sister, it was his fault. He should have left before she died, people would have helped. He looked at his tools. The knife was perfect. He plunged the knife into his heart. It stung. Pain shot through his heart both in and out. Before he blacked out… he saw a figure.